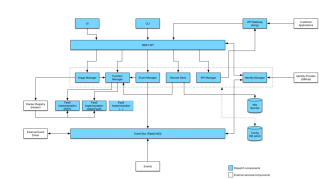 VMware announced its serverless initiative at VMworld 2017, where a Functions-as-a-Service (FaaS) demo using Apache OpenWhisk, an existing open source FaaS technology, was presented. Since then, the serverless team has been working to define what a serverless framework by and for a VMware-based infrastructure would look like. The resulting work is Dispatch, a new VMware-originated The post VMware Releases Dispatch, an Open Source Serverless Framework appeared first on Open Source .